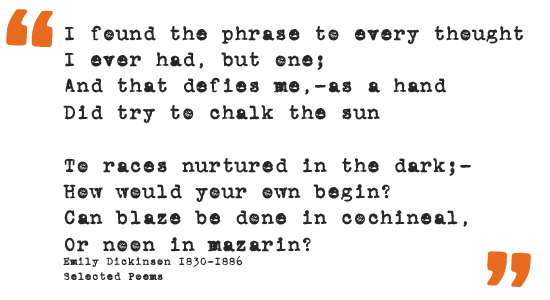 When we formed Chalk the Sun, we wanted a name that would distinguish us from the plethora of “Write Stuff”, “Write Idea”, and “Write On” titles which litter the internet. We wanted a name that embodied the idea of creative endeavour, of struggling to express ideas in words. We toyed with “Tangled Web” but decided it sounded like a weaving group – or a coven of white witches. We felt that “Figment” had a lot of appeal but realised that so did a highly successful film production company. We then trawled through some writers who’d found metaphors for the writing impulse, but rejected T. S. Eliot’s “The throbbing taxi …” as being too … well, throbbing, really.

So we turned to Ms Dickinson (or “Emily” as we prefer to call her), a long-time favourite of ours for her economy, density and passion. We loved the colourful imagery of ‘cochineal’ –the flamboyant pink of crushed beetles – and ‘mazarin’ – the dazzling blue of butterfly wings – together with the graphic quality of the central simile: ‘as a hand did try to chalk the sun’. We realise that as a title it is rather obscure, but it means that when people ask us about it, we can quote a bit of Emily at them, which is always a good thing.