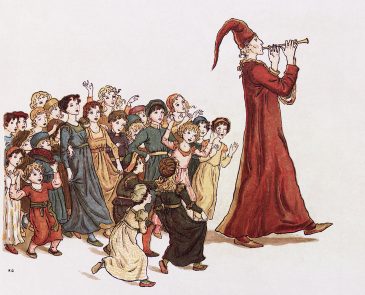 We wondered if the topic for this year’s 200-word story competition was really going to fly. Our partners, South London Storytellers, had chosen the Pied Piper, with its traditional folkloric feel, as their theme. Great for kids, we thought, inspiring for colourful arts and crafts work, but would a medieval German legend really resonate with contemporary urban writers?
Last Saturday we ran a brainstorming workshop to find out.
We sharpened our pencils, booted up our Macs, and homed in on the phrase ‘Pied Piper’ as a warm up. ‘Pied’ took us into a medieval world of serfdom and agriculture: magpies, pied bulls, piebald horses; two-coloured clothing, livery, the fool’s ‘motley’, the jester, the joker, a society in which dress was determined by class and occupation, in which commoners were forbidden to wear certain fabrics – purple, silks, velvets – even if they could afford them.
We looked at ‘piper’ and proverbs like ‘he who pays the piper’, the seductive power of music, the leadership metaphor. The darker themes of the legend began to emerge reminding us of its 13th century roots: plague, political corruption, a community decimated and damaged by the loss of its children.
Google gave us new insights: Northern German towns like Hamelin were targeted by silver-tongued agents, lokators, who promised potential settlers employment and prosperity in Poland. A 13th century phenomenon with 21st century resonances. Think: Nepali village boys building football stadiums in Qatar, Filipinos waiting table on cruise-liners, Sri Lankan women housekeeping in Saudi Arabia.
We thought about the duality in the Pied Piper’s personality, represented by the bi-coloured clothes and revealed when the mayor breaks his promise and the piper exacts his revenge by taking the children. Was the punishment proportionate to the crime? Why do the families suffer for their mayor’s duplicity? Is this a metaphor for the ordinary citizen paying for the wrongs perpetuated by their leaders? A great pre-election theme.
We asked ourselves about the little lame boy who cannot follow the piper and is left behind – did he suffer from survivor’s guilt? What happened to the children? Some versions of the story place them in paradisiacal havens, in others the piper leads them into the River Weser to drown like the rats.
The idea of a community robbed of its young people made us think of modern tragedies like Aberfan, Dunblane, the Ebola outbreak, the kidnapped Nigerian schoolgirls. The British government chose the name Operation Pied Piper for its mass evacuation of children to rural areas and ‘neutral’ countries during World War II; the initiative provided safety at great social and personal cost.
Needless to say by the end of our workshop we concluded that our theme had a lot of mileage in it. We could see why the Pied Piper legend had been taken up by the Brothers Grimm in their fairy tales, by Robert Browning in his whimsical poem of 1842, by Russell Brand in his comic Trickster Tales in 2014. Jethro Tull composed an anthem for the Piper; ABBA, Led Zeppelin and Queen name-checked him; Disney animated the story in 1933; The Muppet Show featured a town full of rats overrun by children; Terry Pratchett paid tribute in The Amazing Maurice and His Educated Rodents; Batman, Charlie Brown, Star Trek: Deep Space Nine, even Freddie Kruger have all referenced the legend. Don’t even mention opera and orchestral work…
So we think you’ll be able to find 200 words for your Pied Piper story… Start today, you’ve got until 21st April to enter and win stuff. Our fab Grand Story Slam on 9 May at Tooting Common, with music, bar, lots of PP-related entertainment, is going to be great fun for the finalists and the audience who will vote for their top story.
Full details: Short Story Competition, Workshops and Slam
Ardella Jones