Are Writers all Weird? 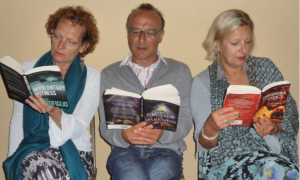 Chalk team Jo, Jon and Ardella “What ya reading for?”

Crime writer Ian Rankin once said,“I still think most writers are just kids who refuse to grow up. We’re still playing imaginary games, with our imaginary friends …” This rang a whole belfry of very loud bells for me. As an only child, I entertained myself quite happily with imaginary friends and acted out dramas involving a collection of empty perfume containers. The Scent Bottle family, as I called them, included a big butch square Chanel No 5 – the Daddy (I was too young to be influenced by Marilyn Monroe associations), an ornate round Matsuko – Mama, plain sensible Auntie 4711 Eau de Cologne, a curvaceous dark green atomiser – the French governess, and tiny pretty children, the smallest being a vial once filled with the incredibly expensive Joy by Jean Patou.
Some years later, I can still find my mental adventures far more absorbing than real life. Last year, in mid-thriller, I dragged myself away from my writing to attend a dinner party and found myself churlishly longing to be back in the graveyard with my semi-automatic wielding villain Glock instead of listening to tales of my fellow guests’ loft conversions, incompetent nannies and Airbnbs in Aix-en-Provence. Over the centuries, female writers have created heroes, from Darcy to Lord Peter Wimsey, more engaging than the motley selection of men they encountered in real life.
I know writers who celebrate their characters’ birthdays and a playwright who sends herself postcards from her protagonists when on holiday (an advance on Alice Walker’s characters who just talked to her as she wrote The Colour Purple). I know a novelist who wears different hats when typing work from different character viewpoints, and one who recites dialogue, with accents and vocal ticks, when walking along the front in Brighton. I have been known to dream with an accent.
A childlike view of the world and an over-active imagination is almost a genuine occupational qualification for children’s fiction writers who are often drawn from amongst the more eccentric sector of adult society. That applies to people in children’s TV too; my friend and colleague Jonathan Wolfman, BAFTA-laden producer of CBBC’s Wolfblood, spends hours worrying about the right canine (wolverine?) prosthetic teeth for his cast and has been known to roll around acting out wolf transformations on his living room floor.
Embrace your inner weirdo!
Ardella Jones