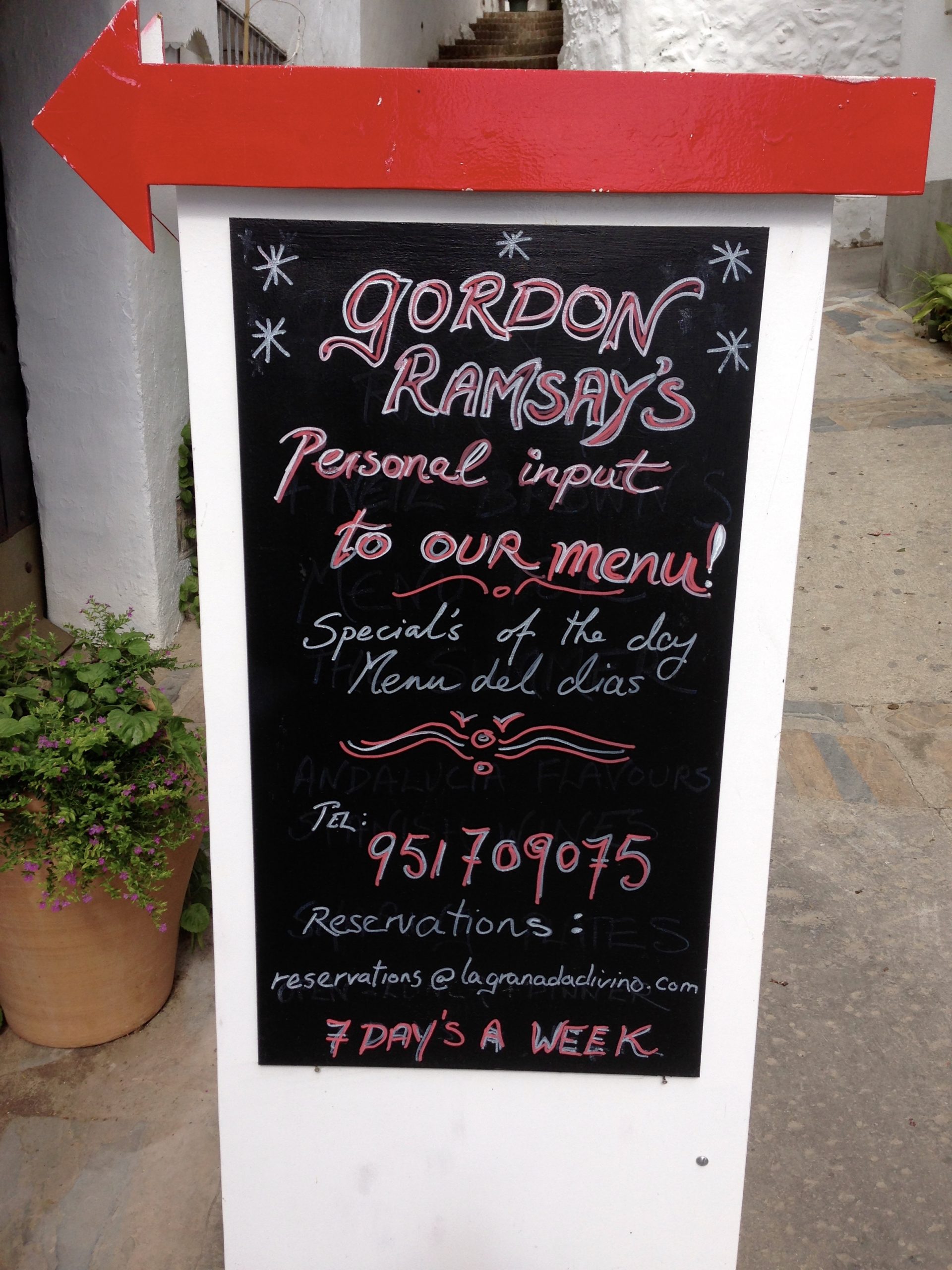 This week the Gordon Ramsay show hit Gaucin to make or break a struggling local restaurant, La Granada Divino. Channel 4 had descended on the mountain-top village to film the programme months earlier, posing a lycra-clad Gordon and his bicycle on the vertiginous roads, buying up all available prawns and luring local socialites into the restaurant. A telly narrative, with a fairly loose relationship to reality, was worked up in which owners Milan and Gina, retired Brits of uncertain origins, had s

unk their life-cash into the business, and were depending on the hapless chef, a lugubrious shaven-headed young man called Neil, to turn their nest-egg into a golden goose.
Come Tuesday night, the entire English-speaking community are glued to their TV sets with bottles of Rioja and bowls of crisps, ready to savour some televisual humiliation. “The village looks sooh pretty,” we coo as the opening shots unfold. “Gordon never actually cycled up that hill,” murmur the cynics. “Poor Neil!” we chorus as the chef is treated to the inevitable Ramsay roughing up.
Neil’s claim to haut cuisine seems to rest on a dubious CV, which his new master had puffed up to Escoffier proportions, and a tube of balsamic vinegar which he swirls indiscriminately onto every plate. He has sad eyes, the charisma of an un-cara

melised rice pudding and an enormous, impossible-to-perfect menu. Predictably, the irascible Ramsay comes at Neil with his full armoury of expletives, spiky gelled hair and international culinary expertise, and tells him to shove his balsamico piping tool where the Andalusian sun don’t shine. It’s like watching a King Cobra toy with a pet white rat.

Inevitably the telly tables turn and all our sympathy goes to Neil; Gordon get chummy and tries to help with the menu; the folly of the corner-cutting owners with their tasteless plans for baseball caps and burgers is exposed. We viewers open another bottle and enjoy watching local multi-tasker Jim, brother of Chalk tutor Jo, almost sever several fingers in the dumb waiter. It’s great TV. Neil and Gordon shake hands; the inept entrepreneur owners agree to do better; the sun sets over the fabulous Andalusian vistas. We open a third bottle and do our post-programme analysis, freeze-framing on villagers we recognise and picking out the neighbours’ illegal roof terraces.
Next day Gaucin is hung-over and we need to keep our students firmly focussed on their writing rather than which local looked fattest on telly. HaIf the village book tables at La Granada Divino to see what vast improvements have been made. Inquisitive, star-struck diners are greeted by a pale, morose Neil, who says he hasn’t watched the programme though, judging by his expression, he has heard a lot about it.
The owners, who definitely belong to the “all publicity is good publicity” school of thought, have put a blackboard outside the restaurant bearing the legend “with Gordon Ramsay’s personal input”; several customers remark that he doesn’t seem to h

Gordon Ramsay ‘inputting’ave had much say in their dinners. Fortunately, picturesque Gaucin already boasts half-a-dozen excellent, inexpensive tapas bars, created with no ‘input’ whatsoever from Mr. Ramsay, where we can eat good food and marvel at the power of television to transform lives but not apparently restaurants. 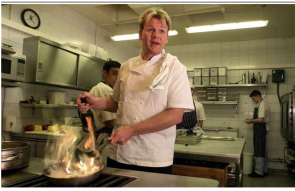