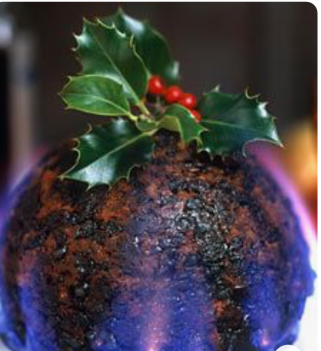 It was a rotten pudding anyway…

It’s traditional for bloggers to provide a list of Christmas books/movies/gift ideas/hangover cures/things not to do at the office party so why should I deviate? I decided to eschew Louisa May Alcott, Laura Ingalls Wilder, Dickens and all the other sentimental, feel-good favourites and find you some of the worst, least merry, most miserable and woebegone Christmases in literature.
1.  Ending Up by Kingsley Amis (1974) A bit of a Scrooge himself, Kingsley Amis uses Christmas to magnify the existing awfulness of life for the ghastly crew of septuagenarians who share Tuppeny-hapenny Cottage. There is Marigold losing the plot, obnoxious Adela whingeing about her gastric ulcer, and her foul-mouthed brigadier brother, Bernard Bastable, sharing scatological observations. Then there’s George Zeyer, a painfully shy professor of central European history, and Shorty, Bernard’s former batman, serving up enough alcohol to ensure ugly scenes.
2. In War and Peace, Tolstoy lightens a typically tense and melodramatic Russian family Christmas with a ball and a very long sentence:
‘The mummers (some of the house serfs) dressed up as bears, Turks, innkeepers, and ladies — frightening and funny — bringing in with them the cold from outside and a feeling of gaiety, crowded, at first timidly, into the anteroom, then hiding behind one another they pushed into the ballroom where, shyly at first and then more and more merrily and heartily, they started singing, dancing, and playing Christmas games.”
The narrative has an enjoyably sneery, aristocratic tone, but then we all know how tiresome it can be when your house serfs dress up as bears….
3.   In Brideshead Revisited, Evelyn Waugh, himself a contender for the Humbug award, describes his alter-ego Charles Ryder’s Christmases as ‘those bleak, annual excursions into propriety’.
In real life on December 25 1945, Waugh wrote: ‘We managed to collect a number of trashy and costly toys for the stockings … We had a goose for luncheon and a tasteless plum pudding made for us by Mrs Harper . . . By keeping the children in bed for long periods we managed to have a tolerable day.’
4. Queenieby Alice Munro (1999) Like the very worst family Christmases, this drab short story ends in violence and tears. At its centre is a vanishing Christmas cake and an officious husband who accuses his wife, Queenie, of having drunkenly given it away to a needy young man with whom he suspects she may be smitten. The story is a rich, fermented Christmas cake mix with incidental ingredients to savour such as Munro’s reference to the way that Christmas cards can act as melancholy reminders of estrangement.
5. A Serious TalkbyRaymond Carver (1980) Christmas is the last straw for a troubled relationship in this bleak story from the master of minimalism. An estranged husband tells his wife how good she looks in the cashmere jumper he has given her. But it’s too late for compliments. The husband (who we learn indirectly has disgraced himself on the day itself) returns next morning for vodka and reproaches: “‘Vera,’ he said. ‘It’s Christmas. That’s why I came.’ ‘It’s the day after Christmas,’ she said. ‘I don’t ever want to see another one.’”
6. Christmas at Cold Comfort Farm by Stella Gibbons (1940) This short story follows on from that hilarious Country versus Town satire Cold Comfort Farm and is also very funny. City sophisticate Flora Poste revisits her rustic relatives the Starkadders for a festive dinner in Howling, Sussex, where a dispute over a coffin-nail rages and lines like “Amos, carve the bird. Ay, would it were a vulture, ’twere more fitting!” abound.
7. Life and Fate by Vasily Grossman (1959)This novel by Grossman ( tagged as the Tolstoy of the USSR by Martin Amis) was judged so dangerous in the Soviet Union that not only the manuscript shredded but the ribbons on which it had been typed were confiscated by the State. The Christmas scenes are fabulously bleak:
“The soldiers … dragged another crate up to the stove, prised open the lid with their bayonets and began taking out tiny Christmas trees wrapped in cellophane. Each tree, only a few inches long, was decorated with gold tinsel, beads and tiny fruit-drops.
The general watched as the soldiers unwrapped the cellophane, then beckoned the lieutenant towards him and mumbled a few words in his ear. The lieutenant announced in a loud voice:
“The lieutenant-general would like you to know that this Christmas present from Germany was flown in by a pilot who was mortally wounded over Stalingrad itself. The plane landed in Pitomnik and he was found dead in the cabin.”
May all your Christmases be merrier.
Ardella Jones