Did Interstellar need a theoretical physicist or a script editor? 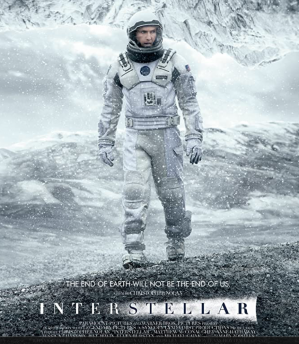 When it comes to making a sci-fi blockbuster, I’m not sure it helps to have a theoretical physicist from Caltech as an executive producer. In the case of Interstellar, it might’ve been better to hire Robert McKee to lick the story into shape and channel the ghost of Elmore Leonard (I’m sure Christopher Nolan knows how to do that) to come up with some decent dialogue.
If Michael Caine said to me, “Now gow and syve the weowd” in that patronising Hollywood mockney he spouts these days, I’d be tempted to reply “Do wha’ myte? Yor ‘avin a laaf intya?”, though I’m not sure if Matthew Mahogany (as my son calls him) could get his languid Texan tongue round those glottal stops.
Anyway, off Matthew (“Coop”) goes to another galaxy, via a wormhole, accompanied by a couple of crew who are bound to get killed because they’re not big enough stars, and Anne Hathaway (“Amelia”, or “Umeeya” in Coop-speak), whose function on the trip is utterly obscure, apart from to deliver, unprovoked by any plot development, a dewy-eyed soliloquy on the universal power of Luurve.
It’s all terribly confusing. What with the wrinkles in time, the gravity, the anti-gravity, the sleeping in zip-lock freezer bags for two year stretches, the hour on the planet that equals 23 years on earth, the circles that are spheres if you go 3D, although “they” come from a 5D universe, but “they” are actually “us” anyway, you just don’t know where – or when – you are.
All this techno speak, and yet the crew seemed to be making it up as they go along. “Thing is,” says Coop, “we can’t stay on this course to Saturn because of the Gargantua’s gravitational pull and the cost in fuel and light years, so …”, and he flips over a computer screen, to reveal … a whiteboard! (who knew!) and he draws a diagram (a circle and a line and an arrow) using … a board marker! (such hi-spec!) and he says, “I’ll just nip round the back!” “That’ll work,” says Umeeya. Well, if she says so …
In the end all I really wanted to know is what do they eat and how do they pee? And when you’re wondering things like that in a sci-fi film, the story isn’t working. I never wondered that in Star Wars 1 or Alien; I was too caught up in the action. And to be fair, the action bits are really good, gripping, visually fabulous, specially the giant wave – eat your heart out Hokusai!  I was surprised how involved I got in the docking process: a bit like Kubrick does the Golden Shot. And the stars (the human ones) are impassioned and luminous.   If only we could figure out what they are impassioned and luminous about. Sack the theoretical physicist! Hire a script consultant! That might save the story, if not the world.
Jo Hepplewhite