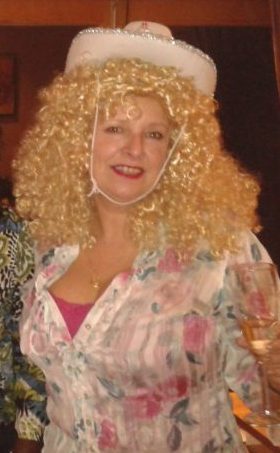 Ardella does that cowgirl look again

I’ve just finished reading my mate, fellow Old Bristolian, Alan Budge’s book For God’s Sake, about his spiritual journey, and now I am trying to write a review.  It ain’t easy. Not because Bishop Budge’s book (yeah that’s our nickname for him and it alliterates nicely) is dull or badly written, in fact, for an exploration of religion and atheism, it’s pretty pacy and racy with a fair sprinkling of adult language, scenes of a sexual nature, drink and drug abuse.  Budge’s prose is crisp and his forays into Buddhism, Christianity and running about in the woods, Iron John style, banging a drum and reasserting his masculinity, make for riveting reading (I don’t know if he actually did the running about in the woods thing but he does explore the debate around modern male roles).

The problem for me as a reviewer is that I know him and a good number of the characters who feature: Chalk co-director, Jo Hepplewhite, who edited the book, gets a mention – “Jo who is so talented blah, blah…”, as do other luminaries from the Bristol Mafia, Chalk tutor, script-guru Jonathan Wolfman and genius theatre director Paul Stebbings M.B.E.  Yet more known associates appear thinly disguised to protect the guilty.  I read avidly, looking for my name-check, and got quite excited by an allusion to “a blonde with a beautiful profile,” until I realised the lovely proboscis belonged to another old acquaintance.
I expected to at least get a mention in the chapters covering Budge’s dark years of drinks and drugs in Chelsea restaurants in the early eighties.  I even did a shift once at his Wild West-themed diner wearing a cowboy hat but the predictably sexist wit of Sloanie boys, combined with the free champagne I guzzled, meant that by 10 p.m. I’d told several Hurrahs where stick their pathetic attempts at humour and their tips, and by 11 p.m. I’d ditched the hat and buggered off to the Goat in Boots – I think Budge came too, he was that kind of a hands-off, non-judgemental manager.
So while my critical eye tells me the book is well-written, my story editor’s head is unable to judge how engaging it is objectively, because any book with one’s friends in is, by definition, a real page-turner.   Not that this always works in the author’s favour as Aldous Huxley found when he published the satirical Crome Yellow in 1921 – Bertrand Russell, Lady Otteline Morrell and several other famous friends never spoke to him again.  Of course, sometimes people don’t recognise themselves in the ghastly parodies their friends create; I shot an irritating acquaintance once, in fiction, and when she read the story she phoned up to say, “That dreadful media yuppie character was like sooh funny but not really like credible, yeah?”
Anyway if Alan Budge wants a really smoking review of his next book, he’d better put me in it and portray me in an exceptionally good light as the towering genius, femme fatale, philanthropist and superb athlete I am…that or a plain brown envelope stuffed with pretty red darlings.
Ardella Jones
For God’s Sake – Religion, Atheism and Why I Gave Them Up by Alan Budge is available from Troubador