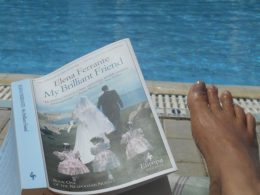 Holidays offer leisurely reading time to catch up on that Costa prize-winner, the obscure 19th century classic or the ‘difficult but rewarding’ Czech literary masterpiece but somehow sun and sangria/sauvignon/rum/arrack/ouzo, possibly a cocktail of them all, seem to sap your powers of concentration and there you are on the beach with your third chick-lit/detective/fantasy novel.
It’s also hard to find the right book for the location. Desai’s The Inheritance of Loss should have been the perfect book for India yet I spent a month in Goa unable to get passed chapter 5 (I had the same problem with Captain Corelli’s Mandolin on four continents but maybe that’s just Captain Corelli’s Bloody Mandolin for you). I tried again in Tamil Nadu, then the following year in Kerala where I switched to M.M. Kaye’s The Far Pavilions a fat, slightly dated, romantic/adventure saga about the Raj. I was totally engrossed; maybe that just proves I like trashy, colonial-fantasy fiction.
On my current sojourn in Hikkaduwa, Roma Tearne’s Mosquito, set during Sri Lanka’s decades of terrorism and internecine ethnic conflict, provided a poignant, unsettling read. I shared the central character’s reactions to heat and humidity; I looked out over the same lush jungle and raging ocean; I heard the same melancholy call of the hoo-ha birds and the haunting hoots of the Colombo Express on the nearby railway track. However, as Muslim/Buddhist riots broke out an hour down the coast and a curfew was declared, the book’s account of the ravages of Tamil/Singhalese division gave me a depressing sense of déjà vu. This little island needs a respite from tragedy and I, shallow Western tourist that I am, need a break. I reached the unhappy ending with something like relief and picked up one of John Burdett’s Bangkok thrillers, thus retaining the Eastern connection, climate and Buddhist culture, but adding a healthy dose of escapism in the form of sexy Eurasian detectives, bitchy lady-boys and monks with mobiles.
Matching reading matter to destination can have more serious consequences than weltschmerz. Think before you take the latest publication by a dissident author to the place of his/her exile. On arrival in pre-Glasnost Moscow back in the 1980s, several of our Lambeth Council cultural exchange group were hauled off for questioning and their copies of Solzhenitzyn’s One Day in The Life Of Ivan Denisovich duly confiscated.  I had only imported a Fay Weldon so I could enjoy a few vodkas in the airport bar while my colleagues pondered the possibility of a non-fictional Siberian labour camp.  Two decades later, The Hidden Face of Eve by excommunicated Muslim feminist Nawal El-Saadawi almost got me hard labour and a niqab in Egypt but fortunately the chain-smoking, sunglass-wearing customs officer was trying to read the subversive text upside down, defeated by the Latin alphabet.
A total contrast between book and travel destination, may be safer and provide more distraction. I once spent a week in a thatched hut in the Gambia during the rainy season with only The Mill on the Floss to keep me entertained (and sane). The generator went off at 10.30 pm (this was a resort for bird-watching tea-totallers) so I lay awake each night in 40 degrees, under the ineffectual mosquito net, scratching enormous bites, and reading about Victorian life in the Black Country by torch light.  Geckoes hissed as they ab-sailed down my mozzie net, monkeys scampered on the roof, parrots squawked and an unknown bird made a noise like a lorry reversing. I survived each interminable night by immersing myself in Aunt Clegg’s starched bonnets and Maggie Tulliver’s love dilemma.  Now that’s what I call escapist reading matter.