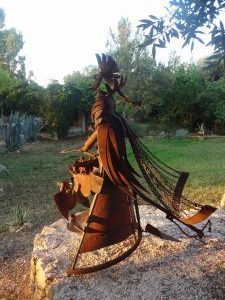 Our sixth retreat in Italy is over with the usual creative twists and turns: a new novel started, an old one finely tuned; someone discovered that they didn’t want to write a novel at all and embarked on a non-fiction book; a new writer amazed us with flowing, beautifully observed tales of life in rural Italy while our regular poet turned to prose fiction set in urban Glasgow. We laughed and drank lots of Primotivo, but most of all we found space to think, experiment and write.
Some unique images have lodged in my imagination: Alison’s old lady with her hand-sewn quilt, the repository of her memories and experiences; Fiona’s beautiful but chilly heroine, in her silk eye mask, tolerating her husband’s caresses; Julie’s cloud-shrouded Wreakin Hill, a childhood recollection filtered through thirty-four years of life in America.
Above all I will remember a very tangible symbol – the sculpture of a Warrior Phoenix in the garden, created from old iron spades and hoes by our host sculptor David Westby. His inspiration was the changing seasons, the rhythm of life in agricultural Puglia, birth, death and rebirth. There’s humour too in the open-beaked horror of two little birds, part of the flock that form the whole, as a swingeing scythe swings towards their heads.
Last year at Autumn equinox, we cast tiny red, wooden birds into the fire pit beneath the raw rusty iron sculpture and made a wish. David then painted the Phoenix silver and black at winter equinox, scarlet and silver for spring; fiery red symbolised the heat of a southern summer. On 21st September, we wrote our wishes on a circle of black and gold wood, symbolising the start of Libra and a year in the balance, and consigned them to the flames – so far no mega publishing deals have materialised!
The poetic words of Isaiah 2:4 were an equal inspiration – ‘And He shall judge among the nations, and shall rebuke many people; and they shall beat their swords into plowshares, and their spears into pruning hooks’. The associations resonate in our world of peacemakers and warmongers and the innocents caught between them: the Syrian refugees washed ashore in southern Italy, the stranded Libyans in the camps on Lampedusa, the forlorn sub-Saharan Africans pushing trolleys outside Eurospin, hoping for a tip so they can survive another day.
The sculpture and the 700 years the Phoenix takes to be reborn reminds us too of the endless cycle of nature in which our human timelines are fleeting and petty.  The flash floods and violent storms that devastated parts of Puglia just before we arrived are a mere blip in shifting climate patterns. Two thousand-year-old Syrian olive trees seem to float in the floodwaters. The 20,000 year-old Messapian cave beneath Masseria Impisi, the fortified farmhouse in which we stay, is flooded with rain. Some of David’s drawings float away, the transience of Art and Man.
The final symbol for our retreat and for the sculpture was the beautiful hairy acorns from a rare Greek oak, the Quercia Vallones, sacred oak of Jupiter, which David presented to us. We all took one to plant as an emblem of new life and renewal, and in a practical attempt to propagate this unusual tree. The Australian and American residents, with their officious customs departments, had to plant theirs before leaving Puglia, but in fifty years some Greek oak saplings may be springing up in Merton, Morden and West Malling. The wheel keeps turning …
Ardella Jones