Liberty Hall: a Night-off for your Brain. New Opportunities for Traditional Plays 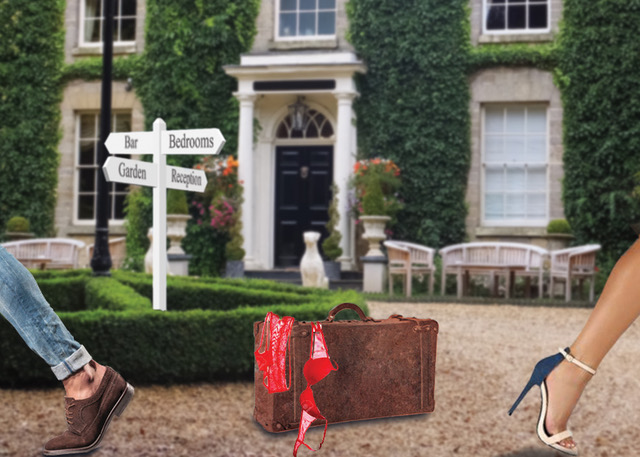 Chalk the Sun writers have enjoyed performance workshops from playwright/actor Robin Jennifer Miller so, when her new play Liberty Hall was staged in February at The Old Sorting Office Arts Centre in Barnes, we jumped at the chance of a theatre trip. A dozen of us pitched up for the last night of this comedy, anticipating top notch performances from the writer Robin as Miss Davis, the tweed clad ‘tea-total’ school marm, producer Julia Haythorn as hotelier Barbara, and Ken Michaels in the role of disapproving American father Marvin Monroe.  We were not disappointed. The performances were excellent; the dialogue was pacey and witty; the farcical plot tripped along with the requisite amount of intrigue, misunderstanding and false identities.
Liberty Hall firmly inhabits that timeless, very British Never-Never Land of farce where characters dissemble and disguise themselves at the drop of a hat, and the audience is swept way on a tide of suspended disbelief to enjoy the ensuing confusion.  When we reached character Colin, dragging up, on the slightest pretext, as the fictitious teacher Miss Grey, I glanced nervously round the theatre fearing that a sophisticated south-west London audience might not be amused by cross-dressing, something routinely hailed these days as ‘a brave journey into authentic selfhood’. But no, people of all ages were guffawing and giggling, clutching their sides, wiping away tears of laughter as Colin, played with great verve and knobbly knees by Alexander Jonas, worked his way through tried and tested innuendoes, and ungainly ‘feminine’ postures. And yes, of course, Marvin, the love interest’s Dad, is totally taken in by Colin’s outfit and falls for him with enjoyable predictability. Even in the 21st century there is still nothing quite so funny as a man in a frock.
That is pretty much why Liberty Hall works so well; most of us have grown up on Carry On films, seventies sit-coms and Brian Rix’s Whitehall farces, plays with names like Let Sleeping Wives Lie. Even younger theatre-goers share this collective memory – it’s what Brits laugh at. We may be more aware, more PC, post #MeToo, but we are happy to forget being metropolitan sophisticates for two hours and laugh uproariously at some good old-fashioned, gender-specific gags. It’s a night-off for your brain.
Playwright Robin Jennifer Miller is making traditional theatrical forms and familiar farcical tropes work for her; she is also filling a gap in the market for the kind of entertaining, accessible plays beloved by audiences and performers alike. Liberty Hall is published by Stagescripts Ltd, a company that acts as both agent and publisher for musicals, pantos and comedies, which will appeal to non-professional and amateur theatre groups.  It has already been performed by a private school in Somerset.
Robin has also published a murder mystery, a homage to Agatha Christie, Murder on Cue with Stagescripts. Again a strict adherence to the conventions of the genre plus limited sets, no special effects, and lots of parts, especially for women and older actors, have made the play very popular on with Am-Dram companies all over the UK. As a writer Robin gets the satisfaction of seeing her plays performed and some nice royalty cheques, but she says, “Be warned – as with everything else to do with writing, the amateur script market is already quite crowded!” Still it’s always good to know of another avenue to explore. You can find out more about publishing plays from Stagescripts Ltd. We look forward to having another good laugh at the next Rare Fortune Production by Julia Haythorn and Robin Jennifer Miller.
Ardella Jones