Minor? Not in My Book 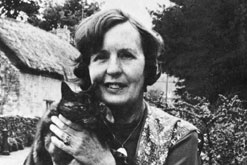 Barbara Pym, one of the finest English novelists of the twentieth century

I’ve been having a great time reading Elizabeth Jane Howard’s excellent novels recently and it set me thinking about the so-called ‘under-acknowledged’ women writers of the last century.    Rosamund Lehman; Elizabeth Taylor; Elizabeth Bowen; Barbara Pym (pictured)who achieved ‘modest success’ after being named ‘most under-rated’ by Phillip Larkin, Jean Rhys who when she finally achieved recognition in the form of the 1967 W H Smith Literary Award famously retorted “It’s come too late”.
Reasons are cited for their lack of literary acclaim. One is that women typically have to juggle home, family and career, and so cannot attack their writing with drive, commitment, singularity of purpose: qualities prized by men, of course and not necessarily guaranteed to produce ‘greatness’.  I think the fact that women write alongside the other demands on their time makes them not only all the more praiseworthy (imagine keeping up your literary career and being married to Kingsley Amis!) but also creates multi-layered, psychologically accurate literature.
Another explanation for their lesser achievement is that they focus on the emotional and domestic, ignoring ‘bigger’ issues – such as business, war, politics, crime and punishment.  But these are themes or settings: they are not the substance of a novel.  Novels consist of conversations, situations, relationships.  Howard’s novelAfter Julius is derisive of the male idea of ‘big’ scope.  It examines the emotional carnage wreaked on a family after Julius, too old to participate in the second world war, decides he must buy a yacht, though he can’t sail, cross the channel to France, though he can’t navigate, and rescue men from the Dunkirk beaches.  He picks up two survivors, one of whom dies, and gets himself killed in the process.  His wife and daughters are left to pick up the pieces, and the novel examines the varied and grave impact of his ‘noble’ gesture.
These women writers are often damned by patronisingly faint praise: a ‘little gem’, a ‘small canvas’, a ‘minor masterpiece’.     Yet modern male writers, who examine war via its impact on relationships, are bestsellers, even when they’re rubbish at it.  Sebastian Faulks’s Charlotte Grey, whose intelligence, we are told, gets her recruited as a spy, behaves like an utter idiot, though wearing nice stockings.  Jessica Rabbit has more psychological authenticity.  And in Atonement, when Ian McEwan can’t decide if his characters survive the war or not and produces a tricksy and downright naff ending, everyone says he’s a genius playing with literary convention.  Compared with Elizabeth Bowen’s Heat of the Day or Irene Nemirovsky’s Suite Francaise, the boys just don’t cut it.
Terms like ‘under-acknowledged’, ‘under-rated’, ‘modest success’ and ‘limited acclaim’ are the literary critics equivalent of Obama ‘apologising’ for slavery.  The subtext is “hey, we know it was wrong, but let’s move on, shall we? We’re not like that now.”  Too right we’re not.  Because those women writers are not under-acknowledged at all – except by men!  So I’m going to start saying things like “I’m reading Howard, you know. Scathing, insightful prose.  Caustic humour.  Massive scope.  Fabulously successful. You haven’t read her?  But she’s huge!”
Jo Hepplewhite