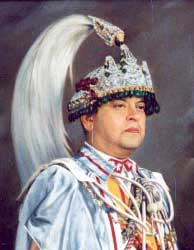 King Gyanendra in a cute hat

Nepal is a country that tests, teases and tempts its visitors, a land of extremes from the climate and terrain to the hot chillies and fancy hats. It boasts more bio-diversity than the Amazon, the highest mountain, the deepest gorge, and, at one time, the tallest man (7’2”) and the shortest (22 inches). Modern mythology cites a European tourist who arrived in Kathmandu, went to Pashupatinath temple, smoked a chillum with the holy babas, and woke up twenty-two years later in Durbar Square, half-naked with an intoxicated monkey on his head. Given that even the local honey may be infused with ganja or poisonous hallucinogenic rhododendron pollen (“Just a small teaspoon at bedtime, madam”), it’s not surprising.
Until 1978 and American aid-related interference, hashish was legal and good King Birendra had his own brand – Royal Temple Balls. Although, ganja still flourishes along the roadsides, Maoist youth groups encourage children to uproot the good herb and inform on their elders should they cultivate it. Typical of a country that has a pointy flag and preserves a 15 minute time difference from its neighbours, Nepal started a war on drugs just as everyone else began decriminalising, and became Maoist when the rest of the world, even its big neighbour China, was moving away from communism.
Despite/because of all the intoxicants, Nepal offers a fertile atmosphere for fiction writers. The blue-faced god Shiva lives somewhere in the misty Himalayas. Young Siddhartha saw the light at Lumbini and became the Buddha in 623 B.C. Yetis roam the jungles, while the ghats are haunted by kichkanya, lovely long-haired maidens, created from the toe bones of corpses, who lead travellers astray (taxi-drivers keep bangles on their dashboards to bribe these hitchhiking ghost girlies). Everest basecamp is haunted by Andrew Irvine, Mallory’s colleague, who perished in 1924 but returns to tweak the tent flaps of contemporary climbers.

The country’s history is littered with royal intrigue and dastardly deeds culminating in the 2001 massacre of the entire royal family, allegedly at the hands of the cocaine-fuelled Crown Prince who conveniently topped himself. The present King Gyanendra, who miraculously survived to point the finger at his dead nephew, has since bowed to Maoist pressure and retired to his massive country estate where he lives in luxury though his former kingdom is one of the poorest countries in the world.
Nepal is only the size of Portugal yet it contains 125 ethnic and caste groups. The Newari live in the Kathmandu valley and the Tharu on the southern plains; the mongoloid Sherpa and Magar dwell at high altitude, while Gurung and Tamang, the remnants of Tibetan King Ashok’s cavalry, now stalwarts of the Gurkhas, inhabit the hills. Post-Chinese invasion, thousands of Tibetans live in remote mountain villages or refugee camps. 123 languages are spoken and a percentage of the population can barely speak Nepali, the national tongue. Kathmandu is the Mecca of the Hindu religion, but there are large numbers of Buddhists, Muslims, shamanic animists like the Kirants, and, more recently, happy-clappy American-converted Christians.
Newari girls get married to a bael fruit when they are five so they never have to face the ignominy of spinsterhood or widowhood, while a few ‘lucky’ ones get to be Kumari, living goddesses, residing in a palace until they are pensioned off at puberty. There’s a festival for every taste including Teej, for the ladies, when women-only dance events include lots of jocular fun with prosthetic penises (beats International Women’s Day hands down), and Shivaratri when everyone in the country, from your favourite auntie to cabinet ministers, gets stoned on bhang lassi or enormous hash pipes. Yes, there’s plenty of inspiration in Nepal, if only you can remember how to hold a pen …
Ardella Jones
Wondrous Nepal is also on a fault line and suffered one of the world’s worst earthquakes in 2015. Sunchalker Rob West is trustee of Impact Foundation, which is actively working in devastated areas, please support them http://www.impact.org.uk