Not Writing in Nepal… 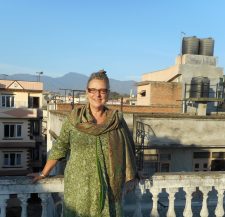 Ardella Jones on the rooftop in Kathmandu

Writers are fond of citing the need to get away from it all, go on retreats, find mental space in order to get creative. I thought that six weeks in Nepal would be the perfect opportunity to write, reflect and start a new novel but then I arrived in Kathmandu. This brave city has been battered by the devastating 7.8 earthquake last year, plagued by Maoist strikes, and starved of fuel by the Indian Madheshi community’s border blockade. The temperature is hovering just above freezing at night and we have no heating so we pile cashmere throws and yak wool blankets on our beds, with a twinge of guilt about the earthquake survivors still living in tents.

We run out of bottled gas so can’t even use the pressure cooker to fast cook our goat; most restaurants are in the same position. My creative energy is all taken up with contriving layers of thermal vests, merino wool longjohns, jeans, cashmere jumpers and fleeces topped with ski-jackets, pashminas, gloves and fur hats. My brainpower is used calculating how many electric kettles full of water we can boil and put in the giant Thermos before ‘the line’ goes down. We spend hours scavenging round shops in search of lemons and Lindt chocolate while our driver looks for petrol on ‘the black.’ We base our restaurant choices not on quality of food but on how big the wood fire is. In fact sitting looking at a fire, adding aromatic twigs, takes the place of watching You-tube or updating our Facebook status. In the streets, the sukumbasi, the landless poor, huddle round fires made of discarded plastic bottles that release noxious black fumes into the already polluted air. Locals sport a variety of scarves, surgical masks and fancy Korean breathing filters to keep out the ubiquitous dust in the valley. At least the air no longer carries the stench of burning corpses as it did last April but frequent earth tremors, a recent one as big as 5.2, fill survivors with traumatic memories and wimpy tourists like me with terror.

I can’t write because my entire being is obsessed with the basics: keeping alive, keeping warm, keeping fed. I focus on avoiding giardia and amoebic dysentery, then obsess over the distance to the nearest clean loo when the Nepali belly strikes as it inevitably does. We get a wi-fi window and I read a Wikipedia article on preventing altitude sickness once we can move up into the hills. The physical has entirely squeezed out the intellectual.

Then the Indian border opens and we get petrol and head for Pokhara with its lakes ringed by the Annapurna peaks. The sun comes out, the mists retreat and the shimmering snow-capped mountains are revealed in all their majestic glory. Children grab their cricket bats and footballs. Families take to Fewa Lake in big pedalloes and overcrowded rowing boats. Tibetan New Year arrives – it’s 2143 – and the refugee community, who fled their homeland in 1959 along with the Dalai Lama, spin their prayer wheels and let their multi-coloured flags flutter in the breeze sending blessings over hills and valleys. Maybe it’s possible to start a new novel after all. Tashi Delek!

The hands-on medical charity Impact Foundation needs your support as much as ever for its work with earthquake survivors www.impact.org.uk (Sunchalker Rob West is a trustee so we know the money goes where it’s needed)