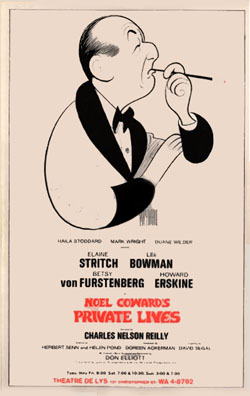 When Noel Coward wrote this perfect social comedy in just three days ­(an act per day?), he summed up the spirit of the age. It was 1930; Europe, still reeling from the slaughter of WWI, was teetering on the brink of another war; the ‘Bright Young Things’ of the 1920s upper classes, Waugh’s Vile Bodies, were struggling not to grow up, subsuming their fear beneath brittle sophistication and the fragile pursuit of fun. The middle classes, the bulk of Coward’s audience, aspired to join them in sipping cocktails, playing gramophones, acquiring suntans, hopping on trains to Paris, adopting the affectations of fashionable speech (“terribly” was the “awesome” of the day). Meanwhile the working classes, equally oppressed by domestic service and mass unemployment, embraced socialism and chaffed against their bonds (the grumbling maid, Louisa, in the play is not just a disgruntled comedy foreigner). In the private realm, divorce was growing more common and Marie Stopes had opened her first family planning clinics so ordinary women could take control of their fertility. This is the world of light and shadow that Coward’s divorcees Elyot and Amanda inhabit.
Lesley Strachan’s production of Private Lives at Putney Arts Theatre captured both the period and the modernity of the play perfectly. She draws amazing performances from her very able cast, particularly Louisa Pead as Amanda and Matthew Flexman as Elyot (pictured), who deliver their acerbic lines with aplomb and impeccable timing. Every comic moment is perfectly pitched and la Strachan’s intelligent direction brings out the physical comedy brilliantly – last night’s audience roared as the tall, elegant Amanda tried various poses to lower her height to that of her dumpy new husband.
The cast did not milk the really famous lines like “Extraordinary how potent cheap music is,” which Pead managed to deliver with a certain wistfulness, a bleakness even, an emotion that runs beneath the witty surface of the play. The passionate love/hate relationship between a couple who can’t live without each other and can’t live with each other is perfectly realised. Feminist critics who bridle at lines like “Certain women should be struck regularly like gongs” should note that Amanda hits Elyot first ­ – the energetic smashing of gramophone records over his head is a great moment. When the verbal sniping, the cut and thrust of jealous lovers, can no longer express their anger and frustration, their emotions erupt into violence and the pair wrestle and scrap in a totally convincing way. From the audience’s reaction, many people in Putney have been there at some time in their inter-personals.
The final performance tonight is sold out but you can catch the matinee at 3 pm today (Saturday 2nd May), Don’t miss this wonderful interpretation of a stunningly sharp play.
Ardella Jones
Putney Arts Theatre Box Office is 0208 788 6943 www.putneyartstheatre.org.uk