Rolling Calf: Writing What I Know 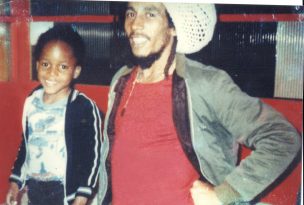 It was exciting to find my thriller Rolling Calf long-listed this week for the Mslexia Novel Competition 2017. The novel, set in Brixton and Jamaica, is a tough tale populated by gun-toting yardies, puff-juggling Jack the Lads, and the super-cool ex-Eradication Squad officer, Miss Widow. There are eighteen homicides, two acid attacks and loads of Jamaican dialect. People who don’t know me very well have raised an eyebrow at both the subject and style. Why is an apparently respectable middle-class, middle-aged blonde, with three degrees, depicting scenes of crack and carnage in Jamaica? Aren’t writers supposed to write about what they know?
Well, I am writing what I know, as far as anyone does in a work of creative fiction. I grew up in 1960s North Kensington when the area was black and poor. My Nan lived in a Rachman slum and my Gran rented rooms from a Jamaican nurse in Camelford Road (demolished to make way for Grenfell Tower). I learned to kiss my teeth at Oxford Gardens School, sang Prince Buster songs in the playground, and witnessed the first Notting Hill Carnival. The likes of David Cameron were yet to discover the joys of diversity in W.10. You could buy a house for a couple of grand and there wasn’t a Trustafarian in sight.
My first job was with Simba Youth, a Rastafarian project in Shepherd’s Bush, where Bob Marley, Prince Fari, Rico Rodriquez and other reggae greats hung out. Job two was sports development in Brixton, arriving just in time for the 1981 riots; I wrote about the ’85 riots for NME. Jamaica was my dream destination and from 1984 I went back and forth as a freelancer, interviewing musicians and soundmen from Augustus Pablo and Sly Dunbar to King Tubby and Gussie Clarke. I set Rolling Calf back in 1994 to keep it authentic (this also spared me the plot implications of 4G mobiles and GPS).
I met a lot of youths, like my villain Glock, in West Kingston; young men from the housing schemes whose career options were limited to deejay-ing, selling drugs, or promoting political violence. I was threatened with a .45 for ‘bad-driving’ a guy in Half Way Tree and had a few guns pointed at me by security forces. A dodgy country policeman arrested me for gunrunning and, bizarrely, I was accused of working for the CIA more than once. 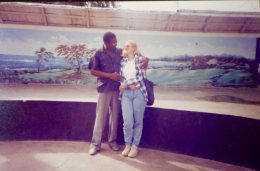 Off-duty Eradication officers, M16s and AK47s poking out the car windows, drove me to a JahLove dance from a party hosted by Clinton ‘Jingles’ Davy, parliamentary candidate and owner of Skateland dancehall, who was assassinated in 1997. I stole the line, “Sorry, miss, me nah want me gun butt fi crease up you gown” from my escort and gave it to Widow’s in the chapter Joyride. Another time, like Widow’s white sidekick Kim, I did save my female photographer and myself from some ‘bad-man,’ who were so sure I wouldn’t understand their Kingston dialect that they openly discussed their plans for a spot of gang rape in front of me.
My personal experience of crack and guns is limited and gained from the cushioned position of a community worker or journalist, but then that’s what writers are like – we’re the nerdy little observer in the corner with the notebook. Even 1960s American crime writer Chester Himes, who started writing thrillers like Cotton Comes to Harlem in jail, was only in for fraud. Machete-wielding gangsters, sexy-bad dancehall queens and sharpshooting policewomen are far too busy doing their thing to sit at a desk, day after day, writing about it.
Ardella Jones 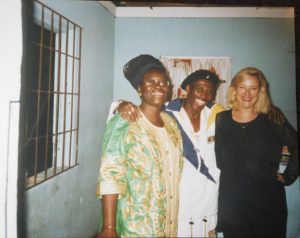 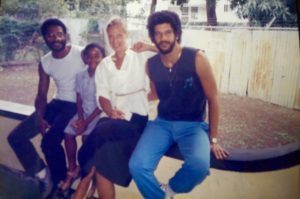