Their Finest: Passing the Bechdel Test 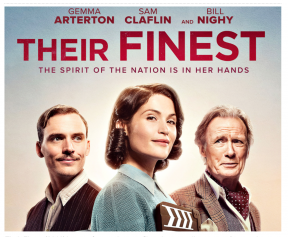 Based on Lissa Evan’s novel Their Finest Hour and a Half and directed by Lone Scherfig, this film is delightfully feel-good nostalgia with just enough clear-sighted realism to save it from schmaltz. Bill Nighy’s brilliantly louche portrayal of an ageing actor, downgraded from romantic lead to drunken old sea salt, provides the laughs, but the film does not shy away from the loss and destruction war brings, nor the cynical, manipulative nature of patriotic propaganda.
The BBC wartime film department are tasked to create an ‘authentic yet optimistic’ movie which will inspire the nation and, with the pragmatic addition of a US Air Force poster-boy, encourage American involvement. Their attempt rivals any similar contemporary initiatives without recourse to the digital technology available to latter-day spin doctors and cinematographers like those in the 1997 satire Wag the Dog. The Beeb do it all with illusion, artifice, clever edits and battalions of troops painted on glass, superimposed over Pendine sands.
The real heart of the story, however, is Gemma Atherton’s secretary-turned-scriptwriter Catherine Cole and her efforts to make movie heroines of twins Rose and Lily who tried to take their dad’s fishing boat to Dunkirk. Try as she might, her director (and love interest) Tom Buckley (Sam Claflin) insists that the hero, the American, even the drunken old uncle – anyone male in fact­ ­– frees the entangled propeller; Rose and Lily can just look pretty and wait for the love of a good man. After all Mrs Cole has only been employed, on half the salary of the male writers, to pen the ‘slop’ – the dialogue between female characters.
Despite his initial animosity, the director is, of course, captivated by the plucky yet lovely Mrs Cole and gives her a few useful tips: story is not about real life, that’s messy and unsatisfactory; story provides the structure and order audiences crave; when in doubt write in a dog.
Mrs Coles’ personal life reflects her professional dilemmas – her artist ‘husband’ expects her to drop her job and play handmaiden to his genius. Phyl Moore (Rachel Stirling), the tough-talking lesbian executive, becomes a stalwart ally and even the most recalcitrant males in the team have to let Mrs Cole finish the script because her writing actually works. Mrs Cole triumphs in the end (not without emotional costs) as does her film.
Mrs Cole’s fictional movie and Their Finest pass the Bechdel test i.e. both films contain several scenes in which two women have a conversation about something other than a man. It’s a shame so many cinematic offerings are still falling short of this modest, feminist goal.
Ardella Jones
You can catch Their Finest now at Clapham Picture House and other local cinemas.