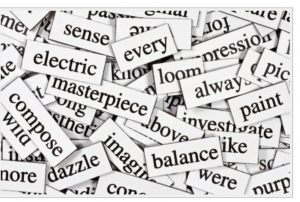 With 171,476 words in the Oxford English Dictionary (not counting 47,156 obsolete ones), English is probably the busiest language in the world, constantly evolving and growing, augmenting its vocabulary by borrowing from other languages, adding new words from science, slang and popular culture. Some new additions are really useful; some set our teeth on edge. Personally I welcome ‘binge-watch’ – how else would I describe my concerted efforts to exploit my free Netflix trial offer over Christmas? (Remind me to cancel the subscription next week!). ‘Seussian’ (of, relating to or suggestive of the works of Doctor Seuss) is useful for a writer, while ‘conlang’, a constructed language, is a quick way of describing Elvish, Klingon or Nadsat, the linguistic inventions of fantasy and dystopian fiction. ‘Photobomb’ is a nice antidote to ‘selfies’ – last year I vowed to do this at famous landmarks and as a result I feature in hundreds of Chinese students’ happy holiday pix. ‘Boo-hoo’ is now a verb; it works. ‘Face-palm’ – to cover one’s face in embarrassment, may be less successful. The metaphorical ‘train wreck’ is effective while ‘first world problem’ covers the negative outcomes one might experience with shortages of ‘artisanal’ sourdough and craft beer in Tooting.
Patrick Hamilton’s 1939 play Gas Light has provided us with an economic phrase for the growing phenomena of manipulating and undermining someone’s reality in this post-truth age. The Donald has, of course, given us ‘fake news’ and ‘alternative facts’, ‘bigly’, ‘covfefe’ and the fictitious African nation of ‘Nambia’; his existence has popularised the mid-nineteenth century nautical word for a braggart – ‘blow-hard.’ Technology gives us ‘botnet’, ‘net neutrality’ and ‘abandonware’ while we all spend hours online reading ‘listicles’ – you know articles like ‘17 things you never knew about the sex lives of celebrity cats’.
There were also some over-used/misused words in 2017 namely: ‘inappropriate’, ‘meme’, ‘authentic’, ‘trope’, ‘narrative’, and ‘journey’, the latter being a noun which once meant the act of travelling from A to B and now indicates any introspective, self-indulgence you can imagine.
Some really annoying new words became ubiquitous: ‘remainer/remoaner’, the dreaded ‘B’ word itself ­‘Brexit’, ‘Brexiteer’, ‘woke’ as in ‘I’m really woke to gender-fluidity’ (that’s another one!), ‘hashtivism’ and ‘clicktivism’ = thinking you’re politically active because you get snippy on Twitter, often related to the previous phrases.
I’d like to see ‘bougie’ as in ‘bourgeoise’ coined more often (it’s been around since Six Foot Under circa 2005) and I love ‘whinese’ a language used by children on long trips. We’ll see if the ‘shruggie’ emoticon catches on in 2018, though I doubt if ‘retroambulate’ will replace ‘walk backwards’. Happy New Year!
Ardella Jones