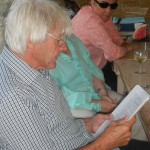 Jim wrote this story on our Italian retreat

Five O’clock, the hooter sounded; the sweet factory ground to a halt.
“Another day over, thank God. Must stop off at Tesco’s on the way home.” said Angela, hanging up her overall.
“Buying more sweets?” laughed Jane. “Tell you what, I need a few things myself I’ll come with you.”
They joined the surging crowd of workers racing for the exit gate. Suddenly there was panic in the ranks. Word had filtered back up the line that there was a security check. Jane stopped dead in her tracks.
“What’s the matter?” asked Angela.
“Security check at the gate, never happened before,” said Jane frowning.
She opened her shoulder bag and started to throw packets of sweets over the adjacent six-foot high wall. It looked like everyone else was doing the same thing as Angela. The sky above the wall became a colourful rainbow of sugar candy, wine gums, jelly babies, sherbet lemons, fruit pastilles, dolly mixtures and many more too numerous to mention.
Angela was shocked, not by the blatant theft of confection but by the sheer volume.
“I didn’t know you took sweets home, Jane?”
“Only now and then, just a few for the kids, as for the others I am sure some have their own sweet shops.” She started to laugh.
“What’s so funny?” asked Angela.
“Come tomorrow morning the kids are going to think all their Christmases have come at once. The other side of that wall is the school playground!”